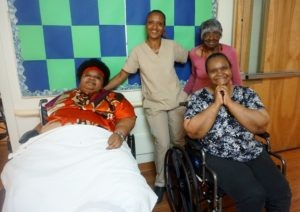 Tamika Muhammad, standing center, enjoys her job as an activity aid at Extended Care. She lived at Harmony House with two of her children for a year and a half.

Tamika Muhammad is in a good place. She enjoys her job, has her own apartment and is looking forward to the future. But her situation wasn’t always so positive.

Muhammad found herself in need of transitional housing after she had to leave a violent living situation. She moved to Harmony House, New Community’s transitional housing facility for homeless families, with her two minor children, ages 16 and 4. She also has a 23-year-old.

When she first arrived at Harmony House, Muhammad was ashamed and down. After getting over the initial shock of losing everything, she realized she had to accept her circumstances and work toward a better future.

“Once I understood what was going on and the obstacles I could beat, I was fine,” Muhammad said. “Everything happens for a reason.”

Muhammad worked for the Boys and Girls Club after-school program for 20 years but decided she wanted to change jobs so she could be home with her children, particularly her youngest who is 4 years old. She saw an opening at New Community Extended Care for an activity aid and applied. She went to the facility and provided her resume, cover letter and references and was granted an interview. She got the job and has been working at the nursing home since November 2018, in a 9 a.m. to 5 p.m. role.

Her positive attitude, bright smile and willingness to work make her a good employee, according to Extended Care Administrator Veronica Onwunaka.

“The way she’s able to get residents to relate to her, even the very confused ones, is what makes her very unique. I see her as a positive addition to the future of New Community,” Onwunaka said. “I trust her and I’m glad that she’s with us.”

Muhammad didn’t tell her coworkers she lived at Harmony House when she first started working at Extended Care. But she is no longer embarrassed about her journey.

During her stay at Harmony House, which lasted a year and a half, Muhammad put in many applications for apartments. She was eventually accepted for an apartment in the Vailsburg section of Newark, where she currently resides. She is grateful for Harmony House, which provided a safe place for her and her children in their time of need and allowed them to stay at the facility until she had secured permanent housing.

“Ms. Tamika Muhammad has shown an astronomical degree of resilience in overcoming barriers,” said Harmony House Director Yonette Fredericks. “Through it all, she has been able to persevere and accomplish her goals as it related to obtaining permanent housing.”

Muhammad said the families at Harmony House should view their stay as a temporary part of their journey and not the end.

“It’s a pit stop to get yourself together,” she said of Harmony House. “It was a help for me to get me back on my feet. And that’s what I used it for.”

Muhammad credits her family for raising her with discipline, principles, humbleness and gratefulness, all of which helped her move forward.

She said she has a better understanding of life now and doesn’t take anything for granted.

“You never know when you could lose everything,” she said. “I’m just grateful and thank NCC for being there for me and my family.”